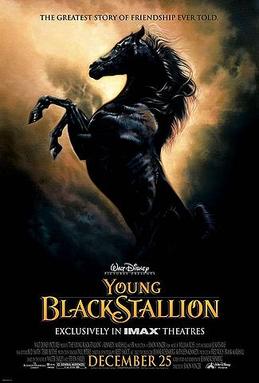 1. Wild Hearts can’t be Broken – A touching story about the strong bond between an orphan girl and her diving horse Lightning. Filmed in 1991, this movie is based on events in Sonora’s life. Even after becoming blind in a diving accident, she defied all odds and continued being a diving girl for 11 years!

2. The Black Stallion – This popular movie filmed in 1979 tells the story of Alec Ramsey and the Black. Alec is shipwrecked on a desert island and bonds with a wild black Arabian stallion whom he then takes home with him. A must-see for horse lovers!

3. National Velvet – Filmed in 1944, National Velvet is the story about twelve year old Velvet Brown and her horse “The Pie” or Pirate. She won the spirited horse in a raffle and with the help of Mi Taylor trains “The Pie” for the Grand National Steeplechase. She then dresses as a boy to ride in the race and wins much to everyone’s amazement.

4. Black Beauty – Told as a narrative by Black Beauty, this is a touching movie. His first home was happy and kind, but his next two owners were cruel. With the fourth owner Jerry he finds kindness and hope until Jerry becomes sick and sells Beauty to a grain dealer who works Beauty until he collapses. While at a fair waiting to be sold, Beauty sees his old friend from his first home and is reunited with him.

5. My Friend Flicka – This family classic was filmed in 1944. Ten year old Ken is determined to befriend and tame his wild filly, who he calls Flicka. Despite the fact that Flicka comes from “bad blood”, Ken decides he must tame her to prove himself.

6. Phar Lap – Another popular movie, Phar Lap is about a champion Australian racehorse. He dominated Australian racing and also won his final race in Mexico in track-record time. Phar Lap died in 1932 after a mysterious illness.

7. Dark Horse – Filmed in 1992, Dark Horse is about Allison, who is the new girl in town.When she gets into trouble by hanging out with the wrong crowd, she is sent to a horse ranch for community service. She comes to love horses until a car accident injures her and her favorite horse. With the help of a friend, she learns to walk again.

8. Second Chances – Second Chances is the touching story of ten year old Sunny Matthews who is unable to walk without crutches after a car accident. She becomes emotionally withdrawn and reluctant to communicate. She and her mother move next door to a horse ranch where Sunny develops a bond with the owner and a mean crippled horse named Ginger and finally begins to make progress on the road to recovery.

9. Gypsy Colt – Gypsy Colt is the story about a young girl and her colt named Gypsy. After Gypsy is sold, his devotion inspires him to travel 500 miles to be reunited with his young mistress.

10. Ruffian – Ruffian is the true story of the greatest filly racehorse. She was undefeated in her first ten races and was quickly on her way to becoming one of the most successful thoroughbreds in racing. Sadly, she was injured in her last and final race, a match race between Ruffian and Foolish Pleasure, and had to be put to sleep because of the injuries to her legs.

My name is Kelly Stutzman and I am a horse lover and owner of Equestrian Supply Online. To see some great saddles for your horse, go to [http://www.equestriansupplyonline.com/page/page/8593139.htm]

THE DEVIL’S ORCHID
Posted in Horses, Pets and tagged Horses
← Emerging Roles of a Horse TrainerFeeding Straw To Horses →