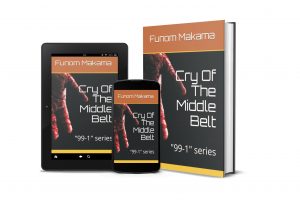 Finally, the book is here. The controversy surrounding the identity “the middle belt” is long overdue. Why is it significant we make this identity official? Some claim that it does not exist and what exist is the “North central” geopolitical zone of Nigeria. Contrary to this, the middle belt existed ever since before the Nigerian Independence, nevertheless, even if it doesn’t exist, agitations and struggles are necessary to make this identity appreciated not just in Nigeria but around the world, after all, the six geopolitical zones of Nigeria never existed before 1999 and also the constitution backing them up. So, what is it about this book “Cry of the Middle belt?”

Somewhere in Agatu in 2016; the Fulani marauders attacked one of their victims who was a pregnant woman, her abdomen was severed and the fetus brought out and smashed on a wall. Also, somewhere in Godogodo, around Kafanchan Axis of Southern Kaduna, a family of seven (Man, Wife and Five Adult Children) were not only killed but butchered into 79 pieces; from this same group of blood suckers who have been tagged as the 4th deadliest terrorist group in the world but are yet protected by the Fulani dominated government of Muhammadu Buhari. These are some of the accounts never published, from the victims of these attempted ethnic cleansing. From 2016 to 2020, there are over 650 accounts of these killings by the same group of evil doers across the nation, but what makes the middle belt peculiar is the fact that it is part of the North and consists of a group of people of different languages and ethnicity that are neither Hausa nor Fulani; hence the generation of conflicts of interests, politicizing of bloodshed and a complete neglect of the victims affected (in most cases, the victims are even accused and to an extension, penalized for crying out). Pathetically, these killings are backed and supported by state and the killers enjoy overwhelming support from the Core North. Why is this the case? This is the question, this book, being the first in the 99-1 series intends to answer. 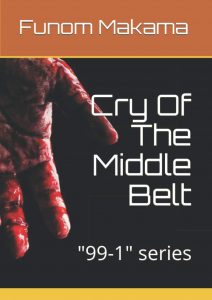 Special emphasis has also been given to the devastation happening in Southern Kaduna and how the Emperor-Governor in person of Mallam Nasir El-Rufai, popularly known as the “body-bag Governor” has played a role in the persecution of these people. A complete breakdown of his schemes, outrageous policies, manifested hate and even excesses in the marginalization, oppression and dehumanization of the Southern Kaduna People have also been taken into full account and documented with facts from easy-to-access publications and articles from established newspaper houses and blogs.

The “99-1 series” is a compilation of news publications, published accounts of these events, all comprising of 99% of the two books, with 1% being the Author’s opinion which aligns with this compilation and it is so to actually give a neutral mind, reading them a clear perspective of what is going on and to see the brutality as it is, not from bias. 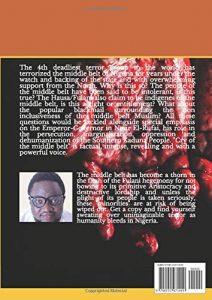 “Cry of the Middle belt is factual, intense, direct, revealing and well expressed with a powerful voice. The middle belt has become a thorn in the flesh of the Fulani hegemony for gradually waking up from its slumber of bowing to its primitive Aristocracy and destructive lordship and unless the plight of its people is taken seriously, this hegemony is ready to wipe out these so-called “minorities” for its dominance to be established. Get a copy and find yourself sweating over unimaginable terror as humanity bleeds in Nigeria.

“Those who identify with a religion but are not spiritual are more dangerous than a bullet“… Author.

“No unity without mutual respect; no peace without justice and fairness. We are not one if my son is prohibited from marrying your daughter, irrespective of your reason.“…. Author.

1. Cry of the Middle Belt

Do well to read these powerful books.

Grab your Copy from the following links

Other books by the Author are: The Soul Talkers, Biblical Love Psychology, The Bastard Citizen, The Devil’s Orchid, Blessed Creation: A Christain Poetry collection, Moonlight Christmas and Other Stories and The Tropical 20,000 series