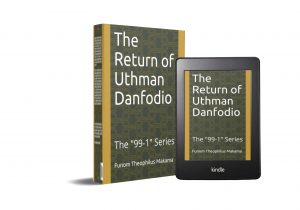 Nigeria is boiling in 2021 but is this coming as a surprise? The secret war against Nigerians by one singular group (Fulani Herdsmen) has been cooking for so long. What has the government been complicit? Why is the tension getting severe and there is a sense of inevitability to the country’s doom among its citizens?

The Return of Uthman Danfodio is the second and last work of the 99-1 series of books centered on the Killings of Nigerians in various parts of the Country and the “open but extraordinary and mind blowing secret” which uncovers the clear Agenda of enforcing the Fulani Aristocracy on ALL Nigerians, following the same successful template used on the Hausa Tribes in the 19th Century; who are now completely submissive to the will of the Fulanis. The “99-1” series is made up, more of publications and articles readily available online in order to give credibility to the school of thoughts well expressed by the writer as 99% of the contents of this book are directly from these publications which include over 400 materials written by about 285 writers and lifted verbatim from 102 different sources online. The 1% is the Author’s opinion, complementary to the message passed by the aforementioned compiled publications so that any neutral mind reading this book will have a clear and objective perspective of the terror Nigeria is passing through. 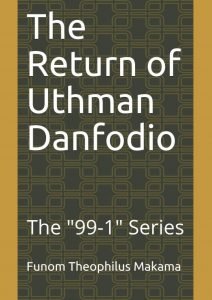 Right now, the only direction Nigeria is heading to is its doom and only the international community can come to its aid; not by forcing it to stay together (being a nation of different enemy camps), but by heeding to the yearnings of its aggrieved citizens; which is also elaborated in this book. The return of Uthman Danfodio is expository, academic, revealing, thrilling, provoking, direct, strongly expressive, not politically correct and above all, factual.

From the history of Uthman Danfodio to his legacy of Fulani Aristocracy to the aggressive, dangerous and desperate actualization of this legacy which has caused tens of thousands of lives across the nation, hinted from the over 165 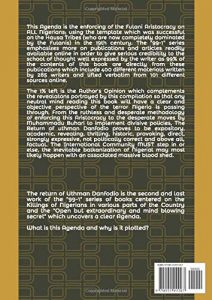 accounts of killings recorded in this book, to the desperate policies, the Fulani grand leader in person of President Muhammadu Buhari is trying to enforce in Nigeria (Grazing reserves, Cattle Colony, RUGA, National Livestock Transformation Plan-NLTP and the dangerous and obsessively pursued Water resources Bill); one can obviously decipher the time Bomb, waiting to explode in the country. With the rise in agitations for the balkanization of the country, from the indigenous people of Biafra (IPOB) to the agitators of the Oodua Nation, and then the Middle Belt Republic, followed by the South-south republic A.K.A Atlantic Republic and surprisingly, the increased popularity in the ideology of an AREWA republic, we can see that Nigeria is already in the beginning of its end.This book recommends the assistance of the international community AS THE ONLY WAY for the bloodless and peaceful breakup of the country, which is also THE MOST REALISTIC AND ONLY solution to the problems of Nigeria.

The “99-1” series which focuses on the dangers posed by the killings of Nigerians across the nation and the CLEAR motive and Agenda behind these killings is a group of books to read. Get The Return of Uthman Danfodio and be in awe after reading its last page.

“The schemer calls it hate, when you uncover his hate… Author.

Your God is not that confused to create me and then ask you to hate me… Author. The “99-1 series” comprises of:

1. Cry of the Middle Belt

2. The Return of Uthman Danfodio

Grab your copy from the following links

Other books by the Author are: The Soul Talkers, Biblical Love Psychology, The Bastard Citizen, The Devil’s Orchid, Blessed Creation: A Christian Poetry Collection, Moonlight Christmas and other stories and The Tropical 20,000 series